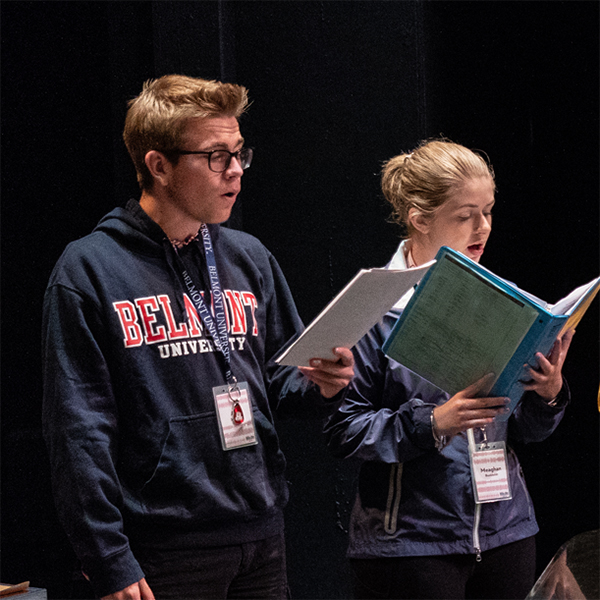 Senior Session is for students completing grades 9-12 (including students who have finished their senior year of high school in the spring of 2020).

After intense rehearsals, the week culminates in performances by each performing ensemble. The concerts take place in various spaces on campus. Friends and family are welcome.

If you are in your Junior year of high school and a permanent resident of Wisconsin, you may be eligible to apply and audition for the Tuition Waiver Award during Summer Music Clinic. This program recognizes exceptional musical talent by awarding 10 students a tuition-free undergraduate college education at UW-Madison or UW-Milwaukee. (The award covers tuition only, and does not cover required segregated fees). You must complete a separate application and submit by May 18, 2020. Learn more about the tuition waiver program.

Students choose one or more performing ensemble (provided the class times do not conflict) and can combine choral and instrumental choices in their schedules.

Each main performing ensemble rehearses two consecutive hours per day and performs in a final concert at the end of the week.

Daily group lessons are an important component of Summer Music Clinic. Each group lesson lasts one hour, and students may choose more than one. Classes cover technique, tone, warmups, and standard literature.

Acting – Learn the skills needed to project your voice clearly, represent your character through body movement, take your performance to the next level, and how to relate acting to all of the arts!

Movie Musicals – A look at the evolving genre of movie musicals, both in terms of original films and stage musical adaptations, and how film impacts our interpretations of stage shows.

Sound Painting – Soundpainting is the universal multidisciplinary live composing sign language for musicians, actors, dancers, and visual Artists. The language comprises more than 1500 gestures that are signed by the Soundpainter (composer) to indicate the type of material desired of the performers. The creation of the composition is realized, by the Soundpainter, through the parameters of each set of signed gestures. The Soundpainting language was created by Walter Thompson in Woodstock, New York in 1974.

Classical Guitar (Limited enrollment) – In a group lesson format, work on essential skills for playing classical guitar including tone production, posture, and practice and performance tips. Students should have had at least three years of guitar-playing experience and need to have their own classical (nylon-string) guitar.

Composition and Arranging – Acquire skills that help you combine, melody, harmony, and rhythm creatively into your own music writing styles. A theory background is helpful if taking this class.

Pan Global Drumming for Percussionists – A performance-based drumming class with an emphasis on the role of drumming in a variety of West African cultures and the transformation of such styles in cultures throughout the world.

Conducting – Choral – Learn fluid beat patterns and expressive skills, view scores from classic literature to contemporary compositions, and experience the perspective from the podium from preparation to performance skills.

Conducting – Instrumental – Learn fluid beat patterns and expressive skills, view scores from classic literature to contemporary compositions, and experience the perspective from the podium from preparation to performance skills. Students will be grouped by their instrument type (winds/brass/percussion or strings).

Latin Dance – Learn to dance multiple styles of Latin dance! This class focuses on partner dances, where two or more pairs dance together in a circle. We will learn solo styling as well with rich influences of Afro-Cuban folkloric and Cuban popular rhythm, culture, and, of course, movement. Come ready to shake it!

Film Scoring and Arranging – Learn the basics of scoring for motion pictures and television including orchestration techniques that are currently being used in the industry.

Women in Music – A celebration of women in music in a wide array of genres, ranging from art music to rock and blues, composing, conducting, teaching, performing, throughout history with focus on social construction of gendered roles in music.

History of Hip-Hop – Most people agree that Hip-Hop was born out of the Bronx in the 1970s, but elements of the art form were present much earlier. Learn about key cultural events, people, and politics that shaped Hip-Hop over the years and where it is today.

Hit Songwriting – Whether or not you’ve ever written a song, come learn the basics of crafting lyrics and melodies in a popular-style song.

Film Music History – Learn about the rich genre of film music and its history from the beginning of films with sound to today!

Jazz – Afro-Cuban – Developed in the 1940s, Afro-Cuban jazz is considered the earliest form of Latin jazz. This course will cover the music’s origins and influence on American jazz by focusing on the rhythm of clave and various Afro-Cuban styles including Son, Rumba, Cha-Cha-Cha, Bembé, and Bolero.

Marching Bands – Learn about marching band techniques and resources, marching bands around the world, and repertoire/show ideas and building!

Jazz Improvisation – Instrumental/Continuing – This class provides additional information and challenge beyond the basics of jazz improvisation.

Masterclass – Classical Piano – Bring in prepared solo piano literature to receive comments from faculty on your performance in a masterclass format.

Masterclass – Strings – Bring in prepared solo literature and accompaniment to receive comments from faculty on your performance in a masterclass format.

Masterclass – Voice – Bring in prepared solo literature and accompaniment to receive comments from faculty on your performance in a masterclass format.

String Chamber Music – Learn the repertoire of duets, trios, quartets and more for strings by playing the music! This class will divide into small chamber ensembles to rehearse repertoire and learn chamber music techniques with instructors serving as coaches.

World Music – This is an exploration of music-cultures around the world. We will look at singing practices, ensemble and instruments, popular music, and political music. Each course session explores these themes in different national and cultural contexts—the vocal techniques and emotion in the Arab world, ensembles like the Gamelan in Indonesia, brass bands in Africa, Karaoke and K-Pop in East Asia, and folk music as protest in Latin America.

Music Theory – Counterpoint – Counterpoint is the combination of simultaneously sounding musical lines – each having its own significance and identity – and organized according to a system of rules. It is considered one of Western Classical music’s most fundamental practices and was studied by great composers like Bach, Haydn, Mozart, Beethoven, and Brahms. Use this class to get a head start on this required course of study for music majors.

Evolution of Jazz and Rock – This course is designed to help us grow in our appreciation, understanding, and enjoyment of jazz and rock music, while learning about its cultural context. Significant contributors to the development of jazz and rock are presented and landmark recordings are heard and discussed, and we will learn to place these uniquely American art forms into their historical, social, religious and philosophical contexts. We will also learn how popular music has and continues to shape popular culture.

Musical Theatre Tips and Techniques – Topics will include taking auditions, projection, and dramatic movement as well as production aspects of theater such as direction and staging.

Global Drumming Class for Non-Percussionists – Explore the vast array of drumming styles from the World in a drum circle/ensemble format. Each student will get the opportunity to try global percussion instruments and learn their specific techniques.

Physics of Music – Explore a variety of scientific topics through a musical lens, from the impact of materials used in building instruments to the acoustic design of concert halls.

Sounds of Superheroes – Learn how to define “hero” as broadly as possible, covering more than just Marvel and DC. A survey of this genre of film, going back to the old swashbuckler films right up through Endgame, Black Widow, and The Rise of Skywalker – breaking down instrumentation and scoring techniques, continuity, and source/reference material. A look at diversity in scoring both in terms of sound and composers.

Jazz Greats – Learn about some of the greatest musicians in jazz history as well as some living legends whose innovation and creativity have made a significant impact on jazz.

Vocal Coaching – Arias to Ariana – Whether you are preparing to belt your favorite pop song or floating up to perfect high notes in your aria, Arias to Ariana is for you. No matter your style, this class will help you learn helpful vocal techniques to bring into your daily practice as well as what harmful habits to avoid to keep your voice developing properly for years to come.

Yoga for Performers – A variety of relaxation exercises and meditations for mind and body that can aid with practice, performance, and general well-being.

Introduction to Melharmony – Conceptualized by Maestro Chitravina N Ravikiran, who was hailed as “the Mozart of Indian Music” (Wisconsin State Journal), Melharmony is an innovative musical system that explores chords and counterpoints based on melodic progression, thereby fusing melody-centric systems such as Indian classical and harmony-centric systems like Western classical to create a new approach to musical composition. Led by Maestro Ravikiran himself, students will compose their own piece using Melharmony in this class.

Each day of Summer Music Clinic: Senior Session is 8am-4:30pm with seven hours of classes or rehearsals (Periods A-G) and a lunch break at 12:05pm (between Periods D and E). 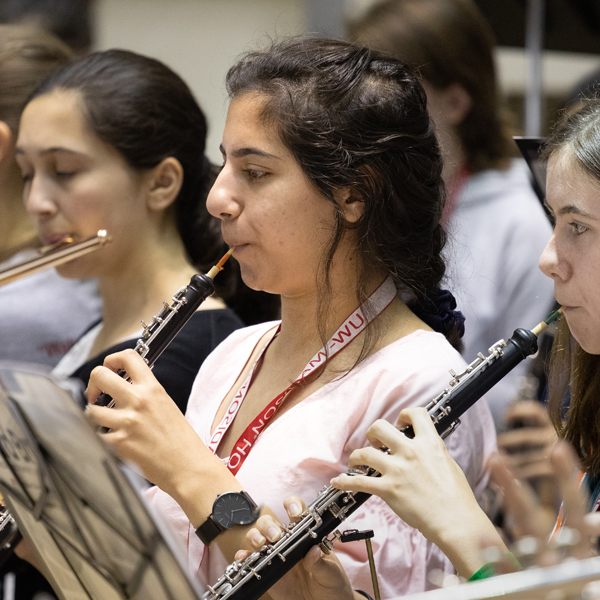